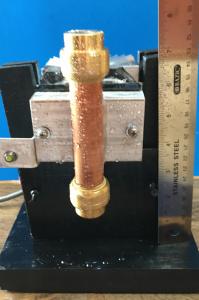 MERRILLVILLE, INDIANA, UNITED STATES, May 10, 2021 /EINPresswire.com/ — A.S.R.INC. Has developed a patented method for taking water out of air, by the use of the Dew Cycle

Dew appears on the window, in the winter in my house, if you remove this dew by wiping off, wait and the conditions are right it will reappear .This is exactly how our unit works. We remove the dew by wiping it off, and the surface of collector area remains below the dew Point, it will reappear. My invention works the same way, we do not cool the air, the dew will attach to the surface below the dew point, and this is stated in the law of Thermodynamics. This process is called the” Dew Cycle”.

Dew is a phenomenon found in nature, our system uses this concept to take water out of air. We use the “Dew cycle”, (Mentioned in our experiment). We can produce small amounts of water, where water is not available where a gallon/ month are needed. This water can be, taken out of the air by means of our new technology, which uses the cooling of a thermoelectric, with our Dew Generator device for small application; such as the possibility of watering large plants, or adding water to a fish tank, due to evaporation. There are many other devices that could use this technology. This small device only works in an indoor environment. This device, “WORKS”, and is controlled by a Microprocessor, and is ready for manufacturing.

The “Dew cycle” also applies to the large systems which can operate outside, this system using a fluid as a cooling source which is powered by an evaporator and condenser system, (U.S. Patent# 8,833,091 B2). This would make large drinking water factories possible. This system would run on wind and solar power. Our technology uses 1/10 of the energy than existing technology to take water out of air. This system operates on an oscillation process, dealing with the first sign of dew. This system is proven by our experiments and working prototype.

(U.S. Patent # 8,833,091 B2 and Patent Pending: covers both the small and large applications.)
Under this coverage, several applications and products are now possible. This revolutionary method of taking water out air can be proven by our experiments, (see Video) and an in person, presentation, of a small prototype, which proves the “Dew cycle” this method, uses the same technology as the large and small application.


EIN Presswire’s priority is source transparency. We do not allow opaque clients, and our editors try to be careful about weeding out false and misleading content.
As a user, if you see something we have missed, please do bring it to our attention. Your help is welcome. EIN Presswire, Everyone’s Internet News Presswire™,
tries to define some of the boundaries that are reasonable in today’s world. Please see our
Editorial Guidelines
for more information.